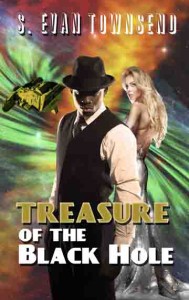 Reviews for Treasure of the Black Hole:

This was such a fun book to read! It’s like a futuristic 50’s crime novel / treasure hunt complete with fedoras, private investigators and the ever present blonde bombshell.

This book will have you turning pages quickly in a feeble attempt to try and keep up with each new twist and turn. Just when you think you have it…BOOM…. another twist. I LOVED it.

The technology is awesome. This author describes everything so well I could clearly see the entire story play through my head as I read. I especially loved Mr. Townsend’s description’s of all the different species of sentient beings out there. What a fascinating imagination he has!

More twists than a licorice factory!, February 16, 2016
By Tim Johnson
This review is from: Treasure of the Black Hole (Treasures of Space) (Kindle Edition)
This story has more twists than a licorice factory. Townsend usually writes “speculative history” or fantasy/sci-fi, but this novel is a more pure science fiction. I have read several of Mr.Townsend’s books, and he has a penchant for action. Never boring, and yet the characters are fully developed and loveable (or hateable…). Couple the action and the plot twists with his sci-fi forte, and you have another winner from Townsend. Looking forward to more in this series! 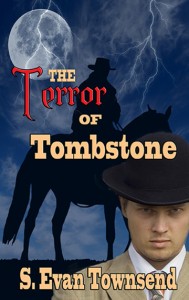 Another dark adventure from S. Evan Townsend. A page turner. This author always provides a good read.
5.0 out of 5 starsJuxtaposition!
By Tim Johnson on January 12, 2016

Whether we remember it from our American History class or whether we’ve seen it in the movies, everyone knows the story of the OK Corral, and the gunslinger shootout that happened there, involving the Clanton’s, the Earp’s and Doc Holliday. Now take the truth of American history and juxtapose Townsend characters – adepts and their associates – over reality. It’s fun to watch the fictional characters interact with the real characters. This book is a fast paced work with many sudden plot twists. A good read. I read it in 3 sittings. 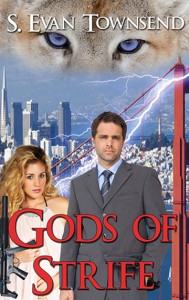 Reviews for Gods of Strife:
5.0 out of 5 starsTypical Townsend – and that’s a good thing!
By Tim Johnson on April 1, 2015
Format: Paperback
Having read a lot of science fiction, Mr. Townsend’s particular brand of “speculative fiction” is both unique and intriguing. He melds together a combination of history, science fiction and magic that isn’t found elsewhere. The reader should always expect the unexpected. And don’t bank on everyone getting a happy ending – that wouldn’t be real-world. Mr. Townsend weaves his story in such a manner that the fantastic becomes not only believable, but familiar and comfortable. I read this book in four sittings.
5.0 out of 5 starsAn excellent read
By L. F. Smith VINE VOICE on October 7, 2015
Format: Kindle Edition Verified Purchase

“Gods of Strife” is touted as a work of speculative fiction, and it is a fine example of that.

Writing speculative fiction would seem to be pretty easy. You just dream up a universe unlike the one we accept as real, plunk down some characters, and have them do interesting things. There are, of course, many writers who have done just that, and they have produced completely forgettable books. Townsend’s book is not at all forgettable.

I think that’s because he has managed the task of creating a work that allows us to suspend our sense of disbelief. When Coleridge described that idea in the early nineteenth century, he explained that if a writer could infuse a “semblance of truth” into a fantasy, he could cause the reader to accept that fantasy as real, at least for the time during which he was reading. He said the key to creating that semblance of truth was human interest. That is, the characters had to resemble actual people as they interacted with their fantasy world.

That’s what Townsend has done here. I don’t want to describe the plot or characters, because discovering them is the joy of reading the book. However, I can say that he starts with an intriguing question: What would happen if some of the ancient gods were real and still operating in the world? The book answers the question.

I enjoyed “Gods of Strife” very much. In fact, I was sorry to reach the end. I recommend it most highly. 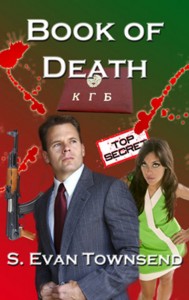 Reviews for Book of Death:

5.0 out of 5 starsAnother winner in the Adept series
By Tim Johnson on May 20, 2013
Format: Paperback

Ever since I read Townsend’s first novel, I have compared his writing style to Piers Anthony’s style. Townsend does add more history (some accurate, some has been manipulated a bit to fit the story), which I like. Townsend’s novels are always fast moving, with the protagonist often targeted for assassination at the unlikeliest of times.

This novel is the only book that you will ever read that simultaneously deals with vampires, meta and nuclear holocaust. Townsend doesn’t preach about nukes (which I appreciate), they are simply a part of the story.

I read the book in four evenings – as always these books are so fast paced that it is hard to find a place to put it down. Clean enough that the kids can read it. Interesting enough that an adult can enjoy it. Another excellent read and another Townsend “Adept series” winner!

4.0 out of 5 starsA Truly Enjoyable Experience
By poshpow on March 8, 2013
Format: Kindle Edition

Action-packed from the start, this book is incredibly fun. A mash-up of paranormal with spy thriller/mystery, the author engages the reader from start to finish with gripping anticipation. CIA agent Peter Branton is sent to Romania to investigate a Communist threat. Here, he discovers a horrifying society of bloodthirsty vampires/necromancers using dark magic for power. The world that the author has composed is masterfully written and full of rich history. His ability to create characters with great detail and a plot full of mystery makes this not just a story, but a truly enjoyable experience.

I was provided a copy of the book by BTS eMag for purpose of honest review. I was not compensated for this review – all conclusions are my own responsibility. 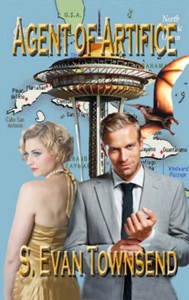 Reviews for Agent of Artifice:

5.0 out of 5 starsAgent of Artifice, A Review.
By louise3anne on July 20, 2014
Format: Kindle Edition Verified Purchase
If I had known that Agent of Artifice was about an Adept, I would have read it much sooner. The title and the book cover do not make this easy to see.
However, I really enjoyed this book. Just finished it and am writing the review at 12:00 midnight.
This reminded me a little of James Bond meets Harry Dresden, but it has its own unique delightful flavour.
Well written, enjoyable style; I hope Mr. Townsend writes an adept series.
5 well deserved stars.
5.0 out of 5 starsRiveting And Intriguing
By N. Medina on November 13, 2011
Format: Paperback

Michael Vaughan looks like an ordinary guy who’s living it up in Havana, having the time of his life. He’s got money, women, practically anything he could ever ask for. Yet appearances can be deceiving, for underneath it all he’s a rogue adept sent to Cuba to assassinate Castro. Magic allows him to infiltrate enemy bases in hopes of gaining the needed intel to achieve a means to his goals, but sometimes it proves to hinder his plans in more ways than one.

His current task is far from easy. There are those who are watching his every step, intent on thwarting his attempts. Dodging bullets and barely escaping with his life, at times, Michael wonders if there’s someone out to get him and begins to suspect that it could be an inside job within one of the guilds. Someone wants to silence him and he refuses to give whoever it is the satisfaction of ending his life forever.

When the leader of his guild is attacked and it is assumed that he is one of his most devout supporters, Michael realizes that his safety is no longer guaranteed. He’s now on the run and a target amongst those who seek to have the guild for themselves. Time is running out as he struggles to clear his name and he’s determined to go down fighting in every way he can.

I absolutely loved this book. The action starts at the beginning and continued consistently throughout the book. The twists and turns and unexpected happenings kept my attention riveted to every page as I sought to find out what happened next. It’s a great read. You’ll like it too. I truly recommend reading it. 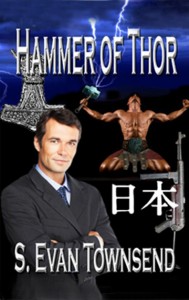 Reviews for Hammer of Thor:
5.0 out of 5 starsMeta + history + mythology = another exciting Townsend novel!
By Tim Johnson on September 19, 2011
Format: Paperback
Like Townsend’s first book, “Radioactive Communist Zombies”, “Hammer of Thor” is a fast paced fantasy novel, blending meta, history and, this time, mythology. One of the things that I appreciate about Townsend’s novels is the absence of foul language or graphic adult material. I can allow my kids to read them. This novel had some major plot twists that I didn’t see coming at all. A fun read, hard to put down. Highly recommended.
5.0 out of 5 starsWild Ride on a Magic Carpet
By Frances Pauli on April 26, 2014
Format: Kindle Edition
This is the first book in the adepts series, a thoroughly original take on magic in contemporary settings. Townsend weaves a plot that does not stop, full of myth, magic and alternate history, and guaranteed to entertain. Could not put the book down. 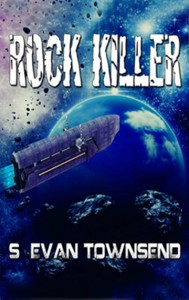 Reviews for Rock Killer:
5.0 out of 5 starsFIVE STARS FOR ROCK KILLER
By Fran Orenstein on March 16, 2012
Format: Paperback
Five stars for Rock Killer by S. Evan Townsend, a great traditional sci fi thriller with current political and ecological overtones. This exciting adventure has ecoterrorism, international and political intrigue, and true heros, coupled with deep space adventure. Studded with out-of-this- world science and heart pounding suspense, it’s a book not just for sci fi enthusiasts, but for everyone who likes a good thriller. Kudos to Sheldon Townsend for this great read.
5.0 out of 5 starsInteresting change of pace for Townsend fans
By Tim Johnson on April 25, 2012
Format: Paperback
Rock Killer is an interesting change of pace for Townsend fans. This novel has no magic, but a lot more sci-fi. The science and technology that Townsend sees in our future is fascinating, realistic and possible. The politics that he sees is terrifyingly possible. Another great novel from Townsend. 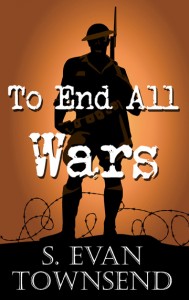 Reviews for To End All Wars:
5.0 out of 5 starsLove this even if there is no war to end all wars!
By P.S. Winn on July 19, 2014
Format: Kindle Edition Verified Purchase
what a great idea this book reveals! As the reader follows First Sergeant O’Malley and then many other soldiers you discover the secret the soldiers have in common. This is a wonderful short novel that shows how hard is is to find a war to end all wars. A sad concept that the author has shared with readers.
Review by: Malcolm Torres on May 24, 2015 : 5.0 out of 5 stars
(review of free book)
This short book is a good sample of Mr. Townsend’s writing style. It incorporates history, war, mythology and fantasy, yet he connects you to a strong main character and he makes the immediate setting (war zones across time) come alive with lot’s of specific details, including smells, sounds and feelings.

Watch this space for upcoming events, signings, and con appearances.